de Lossada, Luis; de Isla, Jose Francisco. Valencia: Joseph Estevan Dolz 1750 . Text in Spanish. Vellum. xx, 407 [ii] pp. Index. Stamp to title page. Some wear and stains to binding, including chip to lower board. Text block nearly detached from binding. “His [Jose Francisco de Isla] earliest published work, or rather one to which he contributed, is the ‘Triumph of Youth,’ printed in 1727, to give the nation an account of a festival, celebrated that year during eleven days at Salamanca, in honor of two very youthful saints who had been Jesuits, and who had just been canonized by Benedict the Thirteenth; a gay tract, full of poems, farces, and accounts of the maskings and bull-fights to which the occasion had given rise, coming as near as possible to open satire of the whole matter, but yet with great adroitness avoiding it.” – History of Spanish Literature Book: Good. Dust Jacket: . 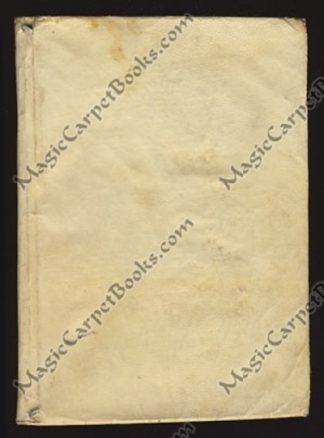